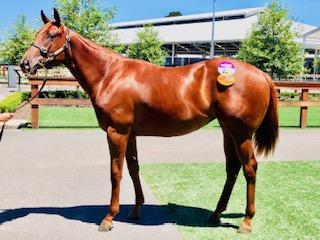 A lovely chestnut filly by Rich Enuff out of an un-raced General Nediym mare called Could Be Something was snapped up by Kim for just 55K at the Inglis Classic Sale!

Could be Something is a half-sister to the Golden Slipper and Magic Millions winner Phelan Ready!

Being Written Tycoon’s fastest, highest rated son at stud, Rich Enuff possesses all the raw power and speed that is distinctive of top-class stallions.

With three consecutive Group and Listed victories, Rich Enuff was explosive on the track, stopping the clock at 1:08.13 – the fastest a 3YO colt has run down the Flemington straight six this century.

This ability coupled with his stunning physical attributes and excellent fertility, is a surefire formula to produce outstanding offspring.

Rich Enuff’s first season was in Queensland at Glenlogan Park in 2016 where he covered 125 quality broodmares, resulting in100 high quality and precocious looking foals, while in 2017 he was well supported by Victorian breeders covering 114 quality mares.

Rich Enuff’s first crop of foals present with size, scope, muscle and very much in the mold of his father, Written Tycoon.

For further information please contact Robyn on 0447 100079 or email markim6@bigpond.com