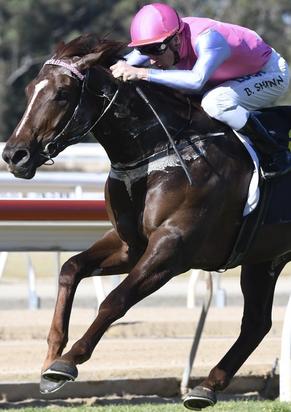 Kim Waugh likes to share the fun when she gets a nice horse. That's why her staff, family and a close friend were gifted a share in Oxford Tycoon before he had a start.

It could turn into the perfect gift as the three-year-old looks to prove he is up to Golden Rose standard in the Rosebud at Rosehill on Saturday.

The Written Tycoon colt was always a good looker and Waugh said to foreman Terry Bellew and her brother Ron Moore, who rides trackwork for the Wyong trainer, that she wanted them to have a share.

She also gave Robyn Hartney, who has become her racing manager, a piece of the action in the colt.

“I have done it before because I want to give something to the people that work hard for me,” Waugh said. “I look after all the costs and they get to enjoy having quite a good horse.

“I always wanted to race one with Robyn and it is just fun to have her part of the team. We have been friends forever.

“When I did it we had broken him in and he had shown a bit and he was always a good-looking type with a nice walk. He is starting to live up to that on track.

“He is still six months away from being at his best but he is still worth having a shot at the spring with.”

Oxford Tycoon broke his maiden on his home track last month but takes a big step up in the Rosebud on Saturday. But he has been there before.

Waugh held enough of an opinion of the colt to take him to the Lonhro Plate on debut where he led up and before running third to Sandbar, a rival again on Saturday, in the listed affair. He was then only a length from Santos in the Skyline Stakes.

“He is a nice horse and he was always only going to get better,” Waugh said. “Ronnie rides his work, so we had a pretty good line on him and he is still improving.

“It was good to see come out and win the other day at Wyong and we can find out whether he is up to the good ones on Saturday.

“If he is we can push on but there is always the option of waiting with him because he is still growing up.”

Oxford Tycoon has taken benefit from his 4-1/2-length win at Wyong and has been made a $4.20 second pick behind Godolphin’s Plague Stone, which has been backed from $2.75 to $2.60 in early betting at Crownbet.

“He is really a natural, he is going to jump and put himself there,” Waugh said of Oxford Tycoon. “I would like to see him with a trail because I think he could really sprint well following something.

“It is a good test for him and we will know where we stand after it.”

Plague Stone broke his maiden in the Rosebud Prelude at Randwick last month and James Cummings has been pleased with the way he has come on since.

“He continues to look very sharp since his strong win over five furlongs a few weeks ago and looks set to let down strongly yet again in what looks another suitable race early on in his campaign,” he said.

Waugh will also bring Shiraz to Rosehill for the Spring Preview, which might prove the final run of his campaign.

“He is very fit and has drawn well,” she said. “He could get a soft run and when he gets that he has shown he could win a race like this one.”